ideal for exceptional vacations to the “Golf Capital of the U.S.”
Mystical Golf’s trio of courses are consistently recognized by Golf Channel to be among

Greens” alongside No. 17 at TPC Sawgrass, the “Alcatraz” hole at PGA West’s Stadium

by PGA.com for presenting one of America’s “great ninth holes” and The Wizard has earned

4-1/2 stars from Golf Digest.
Through Sept. 6, the three-day Gold Package starts as low as $99 (per person, per day, taxes included).  It includes three rounds with cart on each of the much-admired Mystical Golf layouts (plus one complimentary round), three nights’ lodging in well-appointed three-bedroom villa (four beds), free iHOP breakfast daily (available 24 hours per day), and a gratis steak dinner at Logan’s Roadhouse (includes non-alcoholic beverages, taxes).
Over the same time span, the Silver Package begins at $89 (per person, per day, taxes included) and features all the components of the Gold Package except the complimentary round, daily breakfast and steak dinner. Both stay-and-plays offer one complimentary golfer for booked groups of 20 or more players.
“Simply put, we offer the best stay-and-play packages in the U.S.,” says Claude Pardue, President and CEO. “Our three courses continue to draw nothing but raves from our first-time guests, loyal repeat customers returning year after year and the major golf media.”
Additional package highlights include two free beers and lunch at the course each day, complimentary daily range balls, instant replay round for cart fee only, and $15 gift card toward a golf shirt. Extra night stays are available at a moderate cost per person.
Mystical Golf’s three layouts are highlighted by wonderfully fun elements including the only back-to-back island greens in the game (Man-O-War), a front nine of dramatic holes weaving through secluded swampland teeming with wildlife (The Witch), and a splendid layout reminiscent of Scotland and Ireland’s classic courses complete with authentic sod-faced bunkering and castle-style clubhouse (The Wizard).
For Mystical Golf information: www.mysticalgolf.com, 843.282.2977.

About a year ago, I got the chance to play one hole of golf against a teenage girl who happens to be Canada’s best golfer at

the moment – Brooke Henderson. She was doing some advance promotion for the 2015 LPGA Manulife Classic at

Whistlebear, and the organizers introduced her to the media at the host Cambridge club.
She is an amazingly classy, thoughtful, mature young woman, and she has since proven what a damned great golfer she is,

and will be.
Then, we played the course, and lo and behold, on the Par 3 Number 8 hole, there was Brooke, ready to play alongside us

for one hole. Pretty cool.
Number 8 is not long, but it’s a bit challenging – especially for the likes of me. You have to clear a small lake in front of the green, avoid a bunker, and land on a somewhat elevated green. Which, to my shock, I did – I was maybe 20 feet from the hole.
One playing partner dropped the ball within two feet – showing off unnecessarily for Brooke, we felt. Another matched my shot, and the fourth – well, we shall not speak of this. Other than to mention that the splash was impressive.
Brooke landed about as close as I did. I putted – to within maybe two feet. So did Brooke.
Ah ha! My chance to match a professional golfer, to show this 17 year old that old guys still got game. She putted – par. I putted. It stopped on the lip. I took a bogie.
Old guys should just keep their mouths shut, their expectations low. We should also keep the ball she autographed… because you’re never too old to be a groupie. 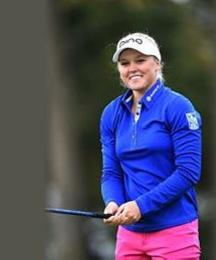 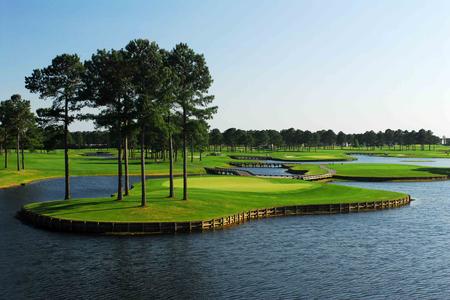 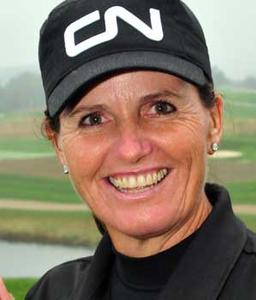 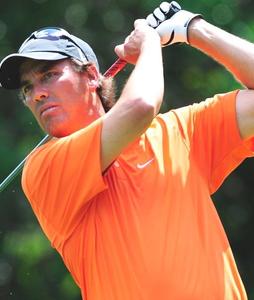 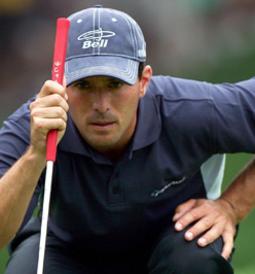 Calcavecchia, on the record: "I don't want to lose my house!" 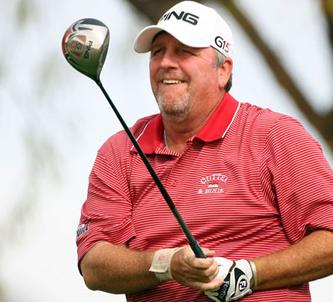