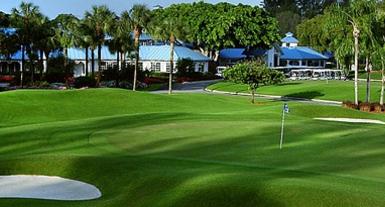 In his 24 years at the Deer Creek Golf Club, Marty Martinez has worn a number of hats.

But in late 2014, he added another, pretty significant chapeau – today, Marty is general manager and

director of golf – and majority owner.

To quote an ancient advertisement, he liked the course so much, he bought the business!

around long enough to know the club as well as anyone except, perhaps, Arthur Hills – the man who redesigned the course n 1993, and likes it so much he now makes it his Florida golfing home base. Arthur says he goal was “to make a good course, challenging to good players, yet playable. I like the course. I enjoy playing it.” He smiles. “I’m here – I could be playing a lot of other places.”

The “challenging yet playable” course design may be one reason for the ongoing success of Deer Creek.

What is beyond doubt is that “the place has been successful,” in the words of the new owner. Deer Creek is flourishing in an era where some courses are struggling. Its mix of members and public players seems to be a recipe for success; its brand new banquet room, with its spectacular waterfall backdrop, has become a destination for hundreds of weddings, receptions, and corporate functions. There were 109 weddings, alone, last year.

But the key to Deer Creek’s success is the golf – and Marty likes his golf course. “This,” he says, “is a course you can play over and over again. It’s a challenge for people of all levels.”

If you happen to start on the back nine, that challenge starts right off the bat, on the 10th tee – it is quintessential Deer Creek. There are six tee blocks; on this hole, a par four, from the longest, gold, the flag is only 339 yards away. Four good shots – with luck, three – you are home. Except they have to be just right – a decent drive to the left side of the fairway; an approach shot over a creek to a green that slopes back to front, bunkered on the right. Challenging, yet playable. (For one golfer, not to be named but he may be writing this article, a terrible second shot shank to the far right of a copse of trees meant real trouble. Except someone has cut a narrow gap through the trees to allow a tricky shot to the green. Or, in this anonymous case, at least to the fringe. Challenging yet playable).

The course (7050 yards from the golds, 6333 from the whites, 5300 from reds, and 4180 from silver) is filled with these kinds of holes. If you play reasonably well, you will not go home weeping; but peril lurks, it lurks.

Marty says he favourite hole is the 14th, a deceptive Par 3 that should be bird territory – if you can miss the bunkers guarding the green, reach the elevated green, not slip over the back, and negotiate the undulating green. “If you don’t hit a good shot,” he says, “the ball’s not going to get on the green.”

My current favourite is the Par 3 fourth, with a deep greenside bunker and a “severely sloped green”. I birdied the hole.

Did I mention I birdied the fourth? I digress.

Some courses reward a golfer’s persistence with a comfortable 18th. Not Arthur’s, not Marty’s Deer Creek. The 359-yard Par 4 18th requires a strong drive if you are to have any chance of reaching the green – with water in front and on the right, bunkers left and back. Most golfers lay up, and patiently wait for their third shot to hit it into the water, or the sand. It’s a great hole, although here, the challenge may somewhat outweigh the playability!

Enough about the course details – did I mention I birdied the 4th hole?  Deer Creek has about 165 members, and Marty says, “We’re trying to keep it around that number,” because it allows optimum play for members, while still leaving tee times for the playing public.

The course is not cheap – green fees range from $110 to $45. Rates change six times a year. Marty says May is the busiest season – partly because that’s when fees drop for the summer. Annual membership fee, on the other hand, is $3950. Whether you’re a member or a walk-on, you are paying for premium golf, and Marty acknowledges that. “We charge a lot so the course had better be in good shape,” he says.

Marty got involved in the golf biz because golfing “was the only want I would ever see my Dad.” He started caddying when he was 13, and discovered an aptitude for the game – he’s been a PGA professional for 29 years. But that’s not his only skill; he told me, “I’m pretty good with numbers. I graduated from Ohio State in business administration.” That sounds like an idea combination for a guy who is owner and director of golf at a course that has been named the best golf course in Broward Country, and dubbed one of the “top two golf courses  in South Florida,” by Golf Magazine. Marty manages a staff of 100 employees.

Deer Creek is a fine golf course, achieving its goal of being “challenging, yet playable.” Service is superb, the course is in good shape, and the bar is a great place to wind down after visiting both water and sand on the 18th.

In fact, in that bar you will find one more, less tangible reason for the success of Deer Creek – the people. As course designer Arthur Hills told me (as we played the back nine together; I got schooled) – “I’m also here because there are a great bunch of people to play the course with.” 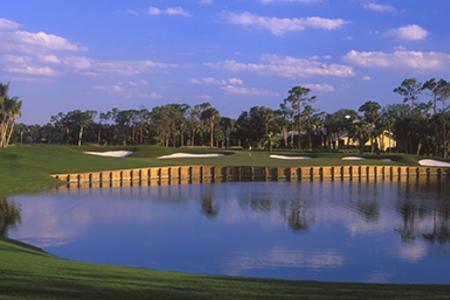