equipment, but they made me a low-ball subscription offer I couldn’t refuse.
The magazine recently polled people (players and others) around professional golf,

to determine “The Top 30 Nice Guys of the PGA Tour”.
Current superstar Jordan Spieth took top spot, but I was most interested in #4 –

Stewart Cink (shown ar right). That’s fourth among 230 PGA players.
Now, Cink is not a superstar, although he did win one of the biggest, the Open (which

he’s closer to the end than the beginning of his PGA career.
His stats are not why I am writing about him. That’s because of his “nice” ranking.

Let me tell you a story:
A few years ago, I was lucky enough to be asked to cover the Honda Classic PGA tournament at the terrific PGA National Resort in Palm Beach Gardens. My specific assignment was to interview the Canadian golfers who were playing.
My first opportunity to do so came after the second day of the tournament – the day players know if they have made the cut, or if they’re going home.
Canadian Masters’ winner Mike Weir did not make the cut and was understandably not a happy man. I approached him and asked for an interview, and he reluctantly agreed – but only for a minute or so.
It was a real interview, albeit of record-shattering brevity, but it could have looked to an outsider like Weir had brushed me off. And that’s how it looked to Cink, who happened to be in Weir’s playing group that day.
As Mike walked away, Stewart approached me. “Mike had a difficult day, so don’t be offended if he wouldn’t talk to you,” he said. “If I can help, or give you an interview in his place, I’d be glad to.”
That’s a small thing – but in the world of highly-paid, often-pampered professional athletes, it felt huge.
I told him Mike had cooperated, briefly, but I thanked him very warmly for his offer to help. He didn’t have to do that. He didn’t know me, he owed me nothing, and he’d just finished a tough round of golf.
But Stewart Cink is, in fact, a genuinely nice guy.
There are arrogant people in professional sports, seduced by their own headlines, but the good news is, there are also really decent people, who have found their way to the top through talent, hard work, and a fair amount of luck – and yet have retained their humanity.
Cink is one. I’ve met some NHL stars who certainly qualify – Lanny McDonald, Paul Henderson, Ron Ellis, and Darryl Sittler, for example. And some ball players – they don’t come nicer than Jesse Barfield, Kelly Gruber or Lloyd Moseby.
I suspect it takes a certain amount of daily effort and concentration to stay nice in the rarified atmosphere for stardom. So it’s worth noting when they manage it.
According to the official PGA website, Stewart Cink has earned more than $35 million US since he turned pro in 1995. That’s impressive.
But I am more impressed by the way he took a moment from a busy day to try to make my life just a little bit easier. 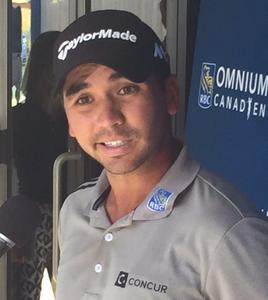 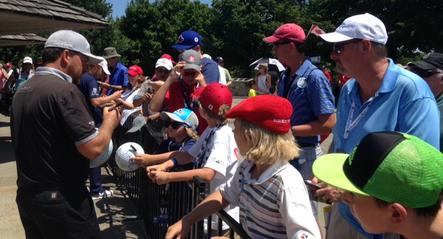 Tony Finau (pictured, right): (Tony Finau is in his THIRD year on the PGA tour, bursting into the elite level of pro golf with five top ten in his rookie season, and his first win, the 2016 Puerto Rico Open at Coco Beach, in 2016).

In an exclusive interview with golfguy.ca, he said that biggest impact of his initial success is that his confidence just keeps growing.

"Honestly, I think it's just the experience that I've been able to have through it all. The confidence to be here, with all the hard work I've put in."

He says the highlight, so far, is "definitely my win. To get a win in my second year… that's he confidence."

Another highlight, he says, was playing in this year's British Open. "You can feel the history!"

(Below, left), even players who missed the cut, like Graeme McDowell, left, or finished well down the leader board, like Patrick Rodgers, above, found time for the kids. 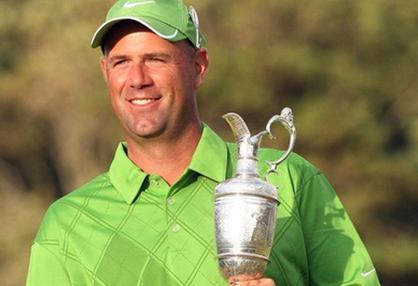 A moment to thank the good guys... like Stewart Cink

Jason Day (right): (After finishing in the middle of the field on Saturday even though he eagled the 18th): "How funny this game is… it's just a strange old game…. I can hit a shot for 235 yards and hit the green… then miss a nine-iron.

"Today was a step in the right direction, after a poor round yesterday.

"The last 12 months (since winning the Canadian Open in 2015) have been a whirlwind. There's still a lot of hard work to day. I want to get better, every year." 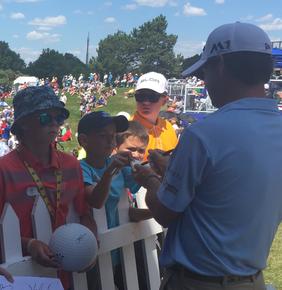 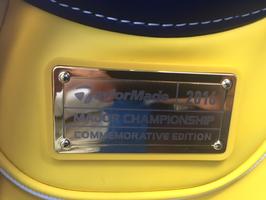 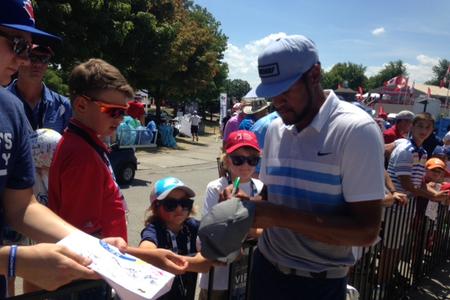 Brian Harmon, above, had one of the low rounds of the day on Day 4, shooting 63 to tied for 23rd. 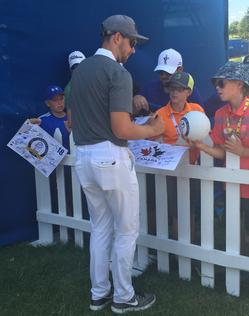 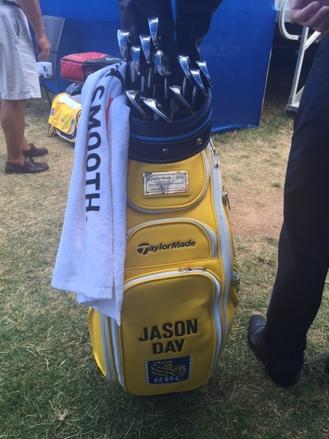 At the star-studded grand opening of the new Shepherd's Rock course at Nemacolin Resort in southern Pennsylvania, I happened to share a brunch table with LPGA player Rachel Rohanna.  Rachel is not a star... at least, not yet. But she's one of the best golfers in the world, with a lot of talent and a tiny ego, and it was a pleasure to meet her.

Our conversation was just that -- a conversation, not an interview -- so I am not going to quote her at length. But it was a treat to hear her enthusiasm for the game of golf – and her excitement over her final round at the Thornberry Creek LPGA Classic, where she shot a 7-under 65, and moved up a mittfull of positions to finish at T36.

She's a centred and thoughtul person, and as long as she's on the LPGA, I'm going to enjoy watching the progress of this fine golf pro. 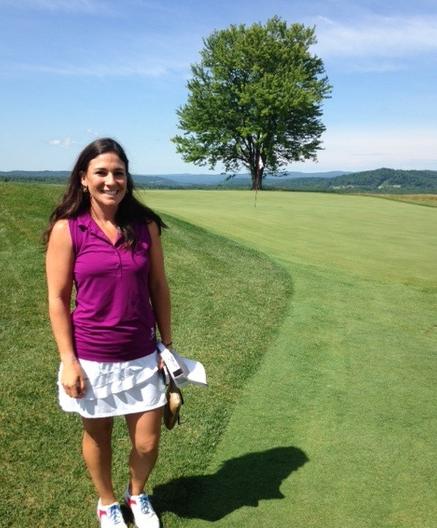 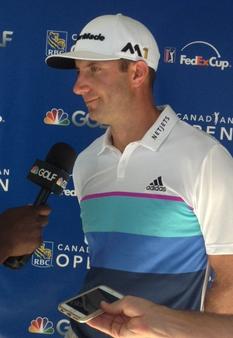 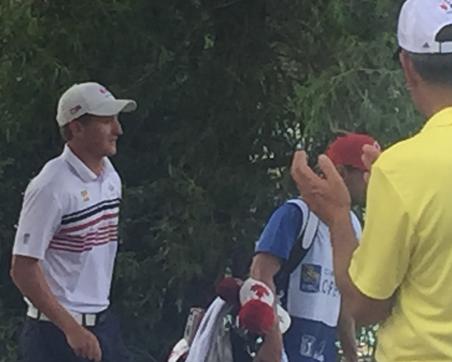 One year later: highlights/best quotes at the 2016 Canadian national championship 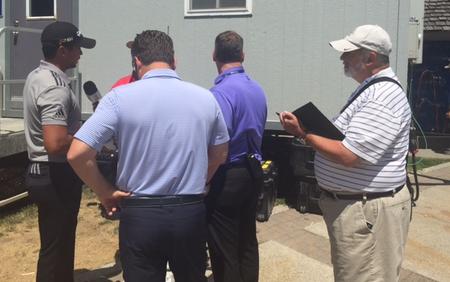 Golf Guy.ca at the 2016 Canadian Open

Dustin Johnson (pictured at right): (after a poor start for four holes and strong recovery, on Day 2: "I really don't know what happened on the first four holes… I was still asleep for the first four holes. But I fought back and turned it around and let I played really nicely. I'm happy with my position." 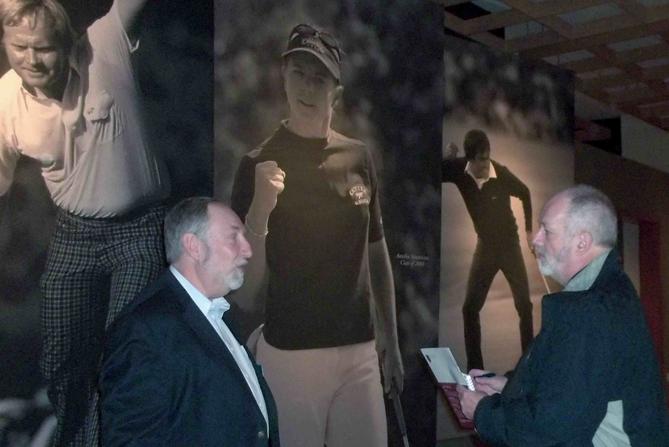 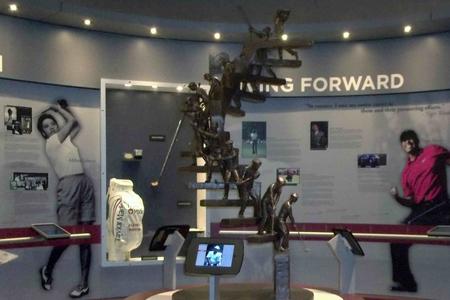 Dr. Tony Parker is proud of “Honoring the Legacy”, the new exhibit at the World Golf Hall of Fame.

He should be. Parker, the historian at the Hall, came here only a year ago, after spending more

than two decades in St. Andrews, associated with the University of St. Andrews and the Royal

and Ancient Golf Club of St. Andrews. “Honoring the Legacy” was the first new exhibit opened at

the World Golf Hall of Fame after he came to the Hall.

“Honoring the Legacy” is sub-titled “a tribute to African-Americans in golf,” and it does that job well.

It’s a story filled with prejudice and tragedy, and, finally, triumph, the journey well envisioned in the

dramatic sculpture, “The DNA of the Golf Swing” at the centre of the exhibit.

The golfers featured in the exhibit include many who were barred from competing in the PGA despite their contribution to the game. The terrible ironies abound – golf course designer Joseph M. Bartholomew, for instance, was banned from playing on the courses he designed.

It’s appropriate that this exhibit is located in the Hall of Fame, because this excellent facility is located only a few miles north of St. Augustine, site of some key civil rights events. Dr. Martin Luther King marched here – the street that bears his name is one of only two Martin Luther King streets in the US on which he actually walked. At the heart of St. Augustine is the heart-wrenching site, The Andrew Young Crossing, where King’s colleague, Andrew Young, led a walk – and was beaten to the ground by whites.

Young’s footsteps are now enshrined in brass footprints on the sidewalk of the Plaza de la Constitucion, the oldest public park in the United States.

For those of us of a certain age, it can be a shock to learn that this act of violence was carried out on June 9, 1964. This is recent history – this story of prejudice and inhumanity is our story.

And the stories from the golf world are simply small snippets of the larger, tragic story. The program says that the exhibit “celebrates the achievements of African-Americans in their contributions to golf… The exhibition charts the struggles and successes of African-Americans as they mark their place in the annals of golf history from the 19th century into the new millennium. This exhibition includes the stories of the early pioneers in golf as they strive to enter into the racially segregated world of ‘Jim Crow” America.”

It wasn’t easy, and it wasn’t quick. Fans of the Masters might be surprised to learn that Augusta National did not invite its first African-American member to join until 1990! Women members were not allowed until August, 2012!

The first black golfer to play Augusta is one of the men honoured in the exhibit – Lee Elder, who competed in the Masters in 1975. The next year, Calvin Peete, one of the most successful black golfers, made his PGA tour debut.

Dr. Charles Sifford, who passed away recently, was the first African-American player on the PGA Tour, joining the tour in 1960, and – like baseball’s Jackie Robinson – suffering all manner of early indignities. Sifford was also the first black golfer inducted into the World Golf Hall of Fame. The exhiit also honours LPGA pro, Althea Gibson.

The central sculpture is an intriguing work –it mirrors the helix that is both the progression of a perfect golf swing, and the structure of a DNA strand. It includes 14 steps, each except the top step holding a statue of one African American golfers, starting with John Shippen, the first African-American to play in the U.S. Open Championship (in 1896, before rules banning black players were more strictly enforced), and ending with Tiger Woods. The top step is left empty – waiting for the next black golfer to make an impact. Parker has described the sculpture as “a statement of social justice and humanity.”

There are many reasons to visit the excellent World Golf Hall of Fame; “Honoring the Legacy” is one of the best of them.