Sage Run, the new sister course to Sweetgrass, at the Island Resort and Casino in Michigan's Upper Peninsula, is going to be an astonishing golf course. Golfguy.ca got a preview of the course-in-progress; it opens next August. In the meantime, Sweetgrass is… well, a very sweet experience. (9th and 18th shared green of Sweetgrass shown below). 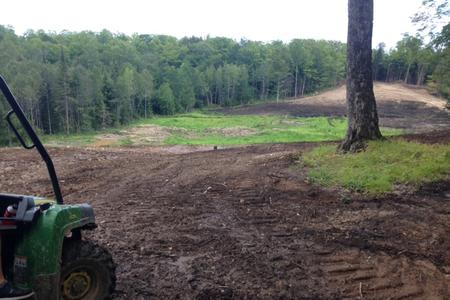 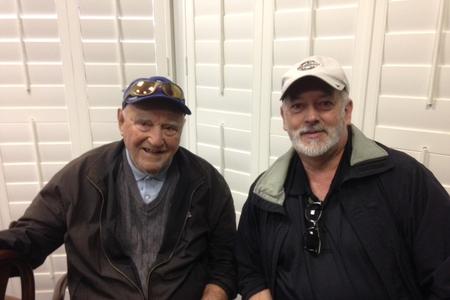 Actually, he’d been been having a quiet conversation with a friend at a card table in

the club house at Deer Creek Golf Club in Deerfield Beach, Florida, until a club

member leads me over to his table. “Doug, my buddy here is a writer – would you

be able to tell him some of your stories?”

The moment the others around the clubhouse hear that Doug Ford, Masters

gathers. His stories are the stuff of legend.

So was his career, although his name may have faded behind some of the larger figures of his time – like Sam Snead, Arnold Palmer, and Ben Hogan. But Ford won 19 tournaments, including two majors, and in 2011 was inducted into the World Golf Hall of Fame, along with Ernie Els, President George H. W. Bush, and two others.

Ford was PGA Player of the Year in 1955; was a member of four Ryder Cup teams (including three winning sides); and, with a nod to the great white north, won the Canadian Open in 1959 (four years after Palmer’s Canadian win) and again in 1963. His PGA career continued through 1975; he was then one of the organizers of the Seniors’ Tour, now the “Champions Tour”, where he competed through 1995.

Ford will celebrate his 94th birthday in August; he played in 49 Masters tournaments, ending that record-breaking string in 2001. (Palmer and Gary Player have since topped that total). But while he didn't play in the 2016 Masters, Ford was at the famed Augusta course, attending the Champions’ dinner hosted by 2015 Masters champ Jordan Spieth – whose parents were probably not yet born when Doug Ford turned pro.

And here the stories start. He loves the Champions gathering, but he leans forward and confides, “they give you $10,000 to come to the dinner.”

The veterans of golf have a different take on money than today’s stars who are playing for purses that can reach seven figures. Prize money was not all that big, he says.

Ford adds, “You could win more money on Monday and Tuesday, gambling, than you could win in the tournament” later in the week. In fact, gambling was a huge part of the game for the pros – and also for the amateurs. Even before he turned pro, he was pocketing some pretty hefty winnings.

Even when Ford turned pro, he remembers, it was hard to earn a paycheque, because in a tournament that started with 150 players, there were only “fifteen money places.” One hundred and thirty five went home without a penny. “It wasn’t,” says Ford, “a very lucrative profession…. Best year I ever had, I think I won $40,000.” This from the PGA Player of the Year in 1955.

The players gambled in games with businessmen, rich kids, and other amateur golfers, but they also bet pretty heavily when they played one another. When Ford won the Masters, he beat second-place finisher Sam Snead, coming from three back to win by three. Snead figures prominently in Ford’s anecdotes; “he and I played a lot of golf.” When he played Snead for money, if Snead won, he wanted the cash on the 18th green; if Snead lost, his opponent had to wait to collect in the locker room.

Ford played in an era of golfing giants, including Snead, who turned pro in 1935, and earned his last cheque on the PGA tour in 1979; two-time Masters champion Ben Hogan (who Ford calls, “one tough cookie”, a man who wanted the money places reduced to 10!); and the young Arnold Palmer, who turned pro in 1954 and eventually won the Masters four times.

Ford finished his Masters in dramatic fashion, holing out from the sand trap to win by three strokes. At Ford’s induction to the World Gold Hall of Fame, Gary Player said, “It’s always the best putter and the best short game that wins tournaments. That’s the name of the game, and Doug Ford was a champion at that.”

Ford told me that the PGA tournament was his most important win, because his PGA victory – in those days, in a match play format which he played against Cary Middlecoff – earned him a lifetime exemption on the PGA tour. “The Masters,” says Ford, “was one of the majors, but it didn’t give you an exemption.” He adds that the Masters began to take on its present-day mystique in the late 1960’s.

Masters’ winners are given the iconic green jacket, but it turns out, they are not supposed to take it home – it stays at the Augusta club. Not every winner has cooperated with the rule – Gary Player’s jacket went home to South Africa after one of his two wins, and he told the organizers that if they wanted it, they could travel halfway around the world to collect it. They didn’t – and today, it is on display at the World Golf Hall of Fame in St. Augustine, Florida, in the room next to the locker room where every member of the Hall of Fame has an open locker, protected by Plexiglas, displaying whatever memorabilia each has chosen for their personal space.

Doug Ford’s locker contains his golf bag, two drivers and a putter – the basics of the game. But it doesn’t include his green jacket. In fact, he did take his home, against the rules, but somehow – not of his doing – it wound up on Ebay. He got a call from the Masters, asking why he was selling his jacket in the on-line auction. He assured them he was doing no such thing; the auction earned $60,000 for someone else, Ford isn’t sure who. Meanwhile, Ford had to purchase a new jacket, so he could attend the Champions’ Dinners!

And that’s where he will be, this April, taking his rightful place among the giants of the game of golf. But the next week, you can be sure he’ll be back at the card table in the Deer Creek clubhouse, in his rightful role as raconteur. He’s a master at that, too. 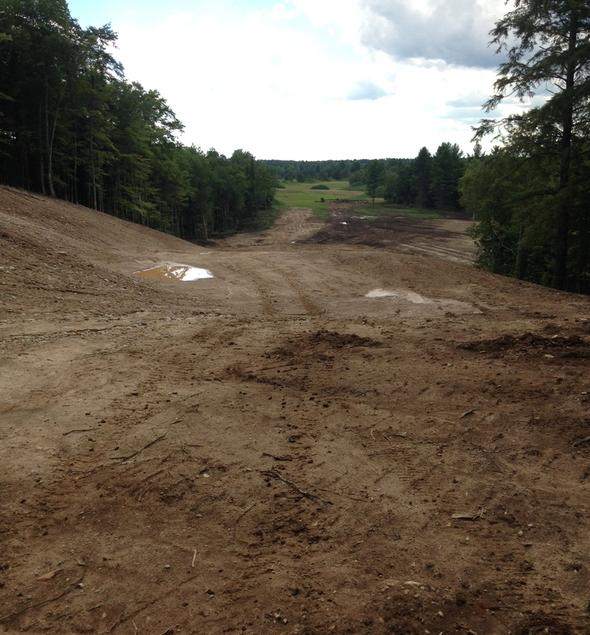 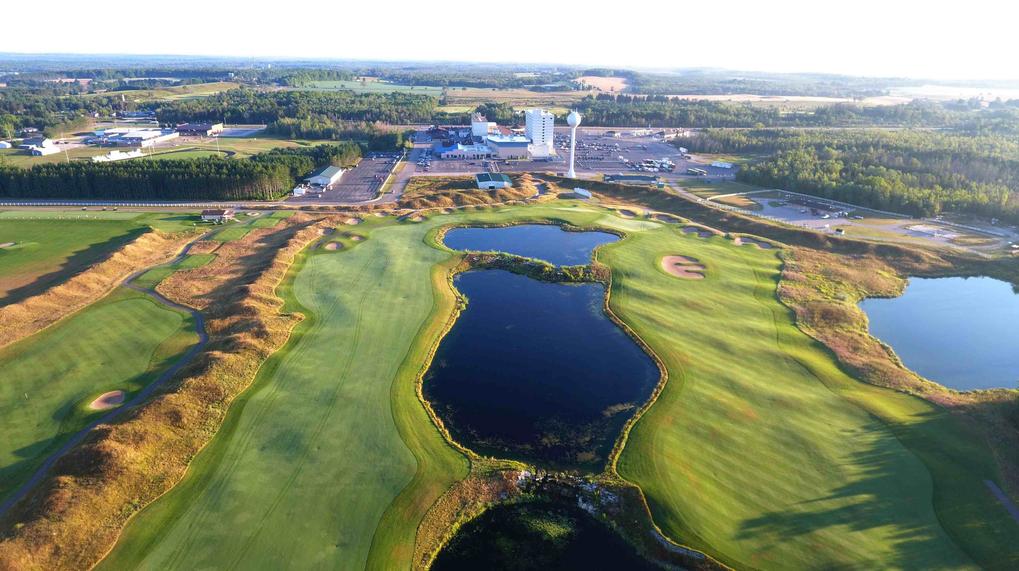 Great golf in the making 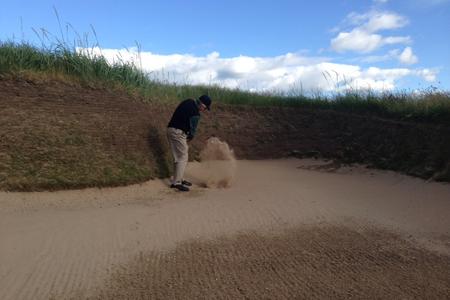 A Canadian golfer triumphs over a quintessential Scottish bunker

Getting "burned" on the Old Course

The world is divided into two kinds of people: golfers and non-golfers.
To identify which side of the divide someone is on, try the phrase: “I just played the Old Course in St.

Group One will light up. Their faces will be animated with interest, envy, awe, and camaraderie.

Group Two will groan. Their eyes will glaze over, their jaws sag, and they will immediately enter into

the REM stage of sleep.

Since returning from Scotland, I have met a lot of Group Two types. Some of them are snoring, still.
Which seems a shame, because playing the 600-year-old original golf course is a fantastic exp…

wait! Where are you going?

Okay, let’s assume there are at least a few Group One folks in my reading audience. This column is for you.

For any golfer, there is something mystical about the Old Course. This is where this impossible, ridiculous, humiliating game was first created, a pastime that has been breaking hearts and wounding egos for six centuries.

And when you play the Old Course, you know why. This is golf for lunatics.

You arrive at the first tee giddy with excitement. There is nothing that improves a golf swing like being giddy… unless it is trying to hit a golf ball in the midst of a swarm of bees. Bees being absent, we went with giddy.

Then, as you prepare for your first drive, you become panic-stricken. The starter is watching, your caddies are watching, golfers who will play later, and have simply come to worship are watching. Turns out, panic balances giddiness, and each member of our foursome managed a pretty good drive.

That was probably a mistake. Because giddiness and overconfidence are, it turns out, a bad combination, and, sure of my skills, I personally put my next shot into the famed Swilcan Burn (or creek). We fished it out, and I proceeded to put my third shot (counting, of course, four) into another part of the Swilcan Burn.

So much for the first hole.

I managed to settle down for some of the following holes, in spite of the gorse (a sticky, prickly, aggressive thorn bush), the heather (which holds your ball as tightly as a Senator holds his travel cheque), the bunkers (about 12 feet deep and straight up) and the “rough” – which should be
called “the wilderness”. What a course! What a game!

We forged on. We were paired with a couple from near London, England, to make up our foursome. The good news was, each of the four of us managed one birdie on the Old Course – a feat for the ages! (Mine was on the 11th. Feel free to ask me about it.)

On the 17th hole, our wives had found seats on an  pub patio, so they could film our pilgrim’s progress. Incredibly, my drive outshone all the rest, and I was pumped. My second shot went into
knee-deep fescue. Third, into the bunker in front of the green. Fourth, fifth, sixth and seventh, also into the self-same bunker.

All, let me stress, captured on film.

Nonetheless, I love this game. Love the Old Course. Love Scottish golf. For a sensible explanation, contact my psychiatrist.